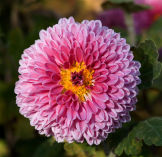 Named from the Greek prefix "chrys" meaning golden (its original color) and "anthemion," meaning flower, years of artful cultivation have produced a full range of colors, from white to purple to red. A symbol of the sun, the Japanese consider the orderly unfolding of the chrysanthemum's petals to represent perfection. 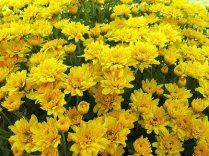 Pyrethrum ("pie-wreath-rum") is a natural insecticide made from certain species of the chrysanthemum. It is a mixture of several different compounds called pyrethrins and cinerins. Originally pyrethrum was made by grinding dried chrysanthemum flowers into a powder. About 200 years ago people in central Asia discovered that dried, crushed flowers of certain chrysanthemums were toxic to insects. During the Napoleonic Wars (1804-1815) this "insect powder" was used to control flea and body lice infestations by French soldiers. Since then, pyrethrum has been used in many forms for effective, low toxicity insect control.

However, because natural pyrethrum is not stable in sunlight it is seldom used in commercial agriculture. Pyrethrum is a relatively low toxicity natural insecticide and since it breaks down quickly, generally has low environmental impact as well. For these reasons it enjoys a reputation of being "safe".