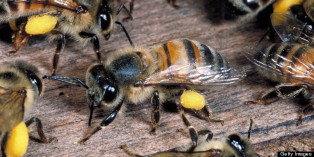 How do they look?: Africanized Honey Bees share a resemblance with other Honey Bees as a result of cross breeding. Therefore they will typically have a black body and alternating yellow and black stripes.

Where can they be found?: When nesting in the wild, you can find AHB's nearly anywhere since they are highly adaptive. When in the vicinity of humans, AHB's can find themselves in the voids of walls, attics, soffitts, old vehicles and even old boxes.

What dangers do they pose?: AHB's are no different than regular Honey Bees in that their honey can damage homes and that they will sting. The main difference is their aggression and their sensitivity to noises and vibrations. AHB's arent any more venomous than AHB's, however it is their sheer numbers and persistence that can lead to hospitalization or even fatalities.